This page is basically complete except that the PDF activies only have the non-interactive versions for now.
Learn By Doing: Supplemental Examples and Exercises for Unit 4B
(Non-interactive Version)
As we mentioned at the end of the Introduction to Unit 4B, we will focus only on two-sided tests for the remainder of this course. One-sided tests are often possible but rarely used in clinical research.
CO-4: Distinguish among different measurement scales, choose the appropriate descriptive and inferential statistical methods based on these distinctions, and interpret the results.
LO 4.35: For a data analysis situation involving two variables, choose the appropriate inferential method for examining the relationship between the variables and justify the choice.
LO 4.36: For a data analysis situation involving two variables, carry out the appropriate inferential method for examining relationships between the variables and draw the correct conclusions in context.
CO-5: Determine preferred methodological alternatives to commonly used statistical methods when assumptions are not met.
REVIEW: Unit 1 Case C-Q
Video: k > 2 Independent Samples (21:15)

In this part, we continue to handle situations involving one categorical explanatory variable and one quantitative response variable, which is case C→Q.

Here is a summary of the tests we have covered for the case where k = 2. Methods in BOLD are our main focus in this unit.

Here, as in the two-valued case, making inferences about the relationship between the explanatory (X) and the response (Y) variables amounts to comparing the means of the response variable in the populations defined by the values of the explanatory variable, where the number of means we are comparing depends, of course, on the number of values of X.

The inferential method for comparing more than two means that we will introduce in this part is called ANalysis Of VAriance (abbreviated as ANOVA), and the test associated with this method is called the ANOVA F-test.

As we mentioned earlier, the test that we will present is called the ANOVA F-test, and as you’ll see, this test is different in two ways from all the tests we have presented so far:

but a different structure that captures the essence of the F-test, and clarifies where the name “analysis of variance” is coming from.

What is the idea behind comparing more than two means? Thus, in the language of hypothesis tests, we would say that if the data were configured as they are in scenario 1, we would not reject the null hypothesis that population means were equal for the k groups.

If the data were configured as they are in scenario 2, we would reject the null hypothesis, and we would conclude that not all population means are the same for the k groups.

Let’s summarize what we learned from this.

In order to answer this question using data, we need to look at the variation among the sample means, but this alone is not enough.

which measures to what extent the difference among the sample means for our groups dominates over the usual variation within sampled groups (which reflects differences in individuals that are typical in random samples).

It has a different structure from all the test statistics we’ve looked at so far, but it is similar in that it is still a measure of the evidence against H0. The larger F is (which happens when the denominator, the variation within groups, is small relative to the numerator, the variation among the sample means), the more evidence we have against H0.

Looking at this ratio of variations is the idea behind the comparing more than two means; hence the name analysis of variance (ANOVA).

Now test your understanding of this idea.

Here is a full statement of the process for the ANOVA F-Test:

Therefore the null hypothesis of the F-test is:

As we mentioned earlier, here we have just one alternative hypothesis, which claims that there is a relationship between X and Y. In terms of the means μ1, μ2, …, μk, it simply says the opposite of the null hypothesis, that not all the means are equal, and we simply write:

The ANOVA F-test can be safely used as long as the following conditions are met:

(ii) The populations are known or discovered not to be normal, but the sample size of each of the random samples is large enough (we can use the rule of thumb that a sample size greater than 30 is considered large enough).

Can check this condition using the rule of thumb that the ratio between the largest sample standard deviation and the smallest is less than 2. If that is the case, this condition is considered to be satisfied.

Can check this condition using a formal test similar to that used in the two-sample t-test although we will not cover any formal tests.

Step 3: Find the p-value of the test by using the test statistic as follows

As usual, we base our conclusion on the p-value.

Note that when we reject Ho in the ANOVA F-test, all we can conclude is that

However, the ANOVA F-test does not provide any immediate insight into why Ho was rejected, or in other words, it does not tell us in what way the population means of the groups are different. As an exploratory (or visual) aid to get that insight, we may take a look at the confidence intervals for group population means. More specifically, we can look at which of the confidence intervals overlap and which do not.

The figure highlights what we have already mentioned: examining the relationship between major (X) and frustration level (Y) amounts to comparing the mean frustration levels among the four majors defined by X. Also, the figure reminds us that we are dealing with a case where the samples are independent.

The correct hypotheses are:

In our example all the conditions are satisfied:

Step 3: Find the p-value of the test by using the test statistic as follows

As a follow-up, we can construct confidence intervals (or conduct multiple comparisons as we will do in the software). This allows us to understand better which population means are likely to be different.

In this case, the business majors are clearly lower on the frustration scale than other majors. It is also possible that English majors are lower than psychology majors based upon the individual 95% confidence intervals in each group.

Here is another example

Do advertisers alter the reading level of their ads based on the target audience of the magazine they advertise in?

In 1981, a study of magazine advertisements was conducted (F.K. Shuptrine and D.D. McVicker, “Readability Levels of Magazine Ads,” Journal of Advertising Research, 21:5, October 1981). Researchers selected random samples of advertisements from each of three groups of magazines:

The following figure summarizes this problem: 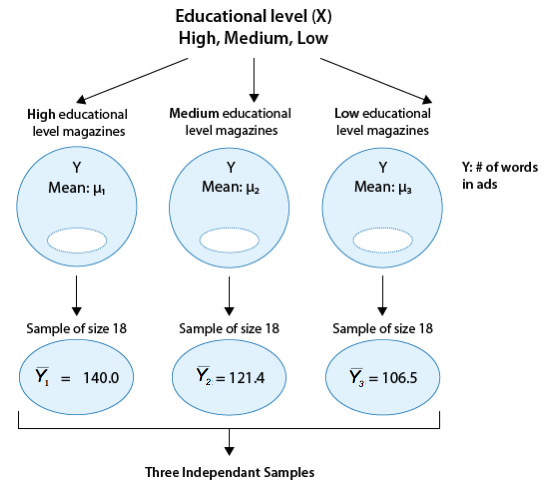 In order to check the next two conditions, we’ll need to look at the data (condition ii), and calculate the sample standard deviations of the three samples (condition iii). 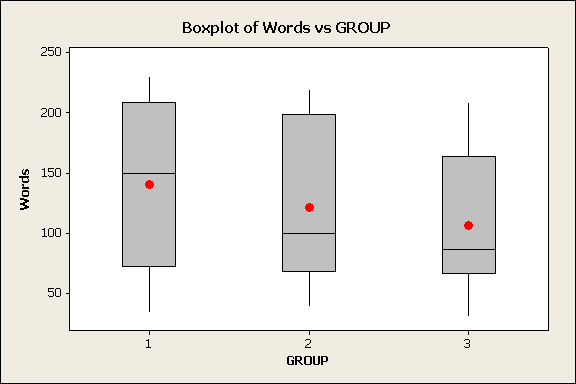 Using the above, we can address conditions (ii) and (iii)

Before we move on, let’s look again at the graph. It is easy to see the trend of the sample means (indicated by red circles).

However, there is so much variation within each of the groups that there is almost a complete overlap between the three boxplots, and the differences between the means are over-shadowed and seem like something that could have happened just by chance.

Let’s move on and see whether the ANOVA F-test will support this observation.

Now try one for yourself.

The ANOVA F-test does not provide any insight into why H0 was rejected; it does not tell us in what way μ1,μ2,μ3…,μk are not all equal. We would like to know which pairs of ’s are not equal. As an exploratory (or visual) aid to get that insight, we may take a look at the confidence intervals for group population meansμ1,μ2,μ3…,μk that appears in the output. More specifically, we should look at the position of the confidence intervals and overlap/no overlap between them. 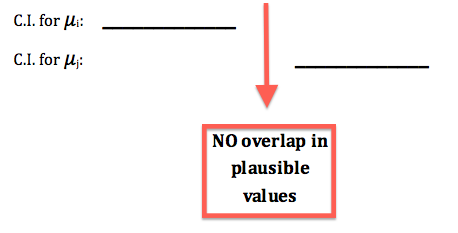 Consider our first example on the level of academic frustration.

Note that this is only an exploratory/visual way of getting an impression of why Ho was rejected, not a formal one. There is a formal way of doing it that is called “multiple comparisons,” which is beyond the scope of this course. An extension to this course will include this topic in the future.

LO 5.1: For a data analysis situation involving two variables, determine the appropriate alternative (non-parametric) method when assumptions of our standard methods are not met.

We will look at one non-parametric test in the k > 2 independent sample setting. We will cover more details later (Details for Non-Parametric Alternatives).

The Kruskal-Wallis test is a general test to compare multiple distributions in independent samples and is a common alternative to the one-way ANOVA.