Recall the role-type classification table framing our discussion on inference about the relationship between two variables.

We start with case C→Q, where the explanatory variable is categorical and the response variable is quantitative.

Recall that in the Exploratory Data Analysis unit, examining the relationship between X and Y in this situation amounts, in practice, to:

To do that, we used

We will need to add one layer of difficulty here with the possibility that we may have paired or matched samples as opposed to independent samples or groups. Note that all of the examples we discussed in Case CQ in Unit 1 consisted of independent samples.

First we will review the general scenario.

To understand the logic, we’ll start with an example and then generalize.

EXAMPLE: GPA and Year in College

Suppose that our variable of interest is the GPA of college students in the United States. From Unint 4A, we know that since GPA is quantitative, we will conduct inference on μ, the (population) mean GPA among all U.S. college students.

Since this section is about relationships, let’s assume that what we are really interested in is not simply GPA, but the relationship between:

In other words, we want to explore whether GPA is related to year in college.

The way to think about this is that the population of U.S. college students is now broken into 4 sub-populations: freshmen, sophomores, juniors and seniors. Within each of these four groups, we are interested in the GPA.

The inference must therefore involve the 4 sub-population means:

It makes sense that the inference about the relationship between year and GPA has to be based on some kind of comparison of these four means.

If we infer that these four means are not all equal (i.e., that there are some differences in GPA across years in college) then that’s equivalent to saying GPA is related to year in college. Let’s summarize this example with a figure: 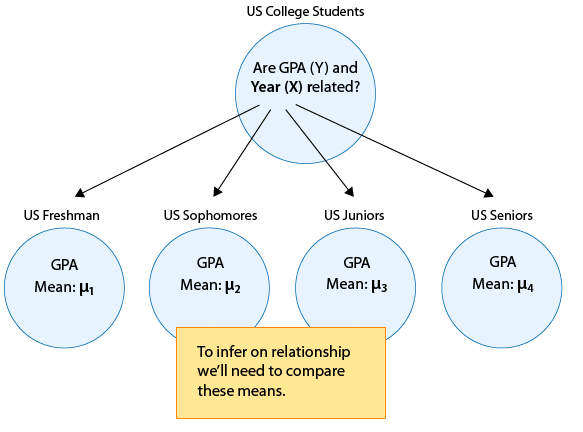 In general, making inferences about the relationship between X and Y in Case C→Q boils down to comparing the means of Y in the sub-populations, which are created by the categories defined by X (say k categories). The following figure summarizes this:

We will split this into two different scenarios (k = 2 and k > 2), where k is the number of categories defined by X.

In terms of inference, these two situations (k = 2 and k > 2) will be treated differently!

LO 4.37: Identify and distinquish between independent and dependent samples.

Furthermore, within the scenario of comparing two means (i.e., examining the relationship between X and Y, when X has only two categories, k = 2) we will distinguish between two scenarios.

Here, the distinction is somewhat subtle, and has to do with how the samples from each of the two sub-populations we’re comparing are chosen. In other words, it depends upon what type of study design will be implemented.

We have learned that many experiments, as well as observational studies, make a comparison between two groups (sub-populations) defined by the categories of the explanatory variable (X), in order to see if the response (Y) differs.

Suppose we are conducting a clinical trial. Participants are randomized into two independent subpopulations:

Recall: By randomly assigning individuals to the treatment we control for both known and unknown lurking variables.

Suppose the Highway Patrol wants to study the reaction times of drivers with a blood alcohol content of half the legal limit in their state.

An observational study was designed which would also serve as publicity on the topic of drinking and driving. At a large event where enough alcohol would be consumed to obtain plenty of potential study participants, officers set up an obstacle course and provided the vehicles. (Other considerations were also implemented to keep the car and track conditions consistent for each participant.)

Volunteers were recruited from those in attendance and given a breathalyzer test to determine their blood alcohol content. Two types of volunteers were chosen to participate: 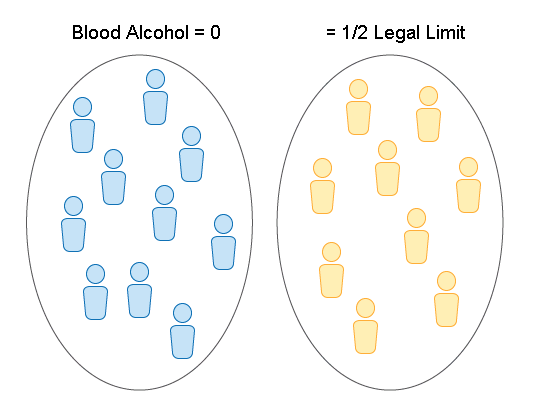 However, in this study, there was NO random assignment to the treatment and so we would need to be much more concerned about the possibility of lurking variables in this study compared to one in which individuals were randomized into one of these two groups.

We will see it may be more appropriate in some studies to use the same individual as a subject in BOTH treatments – this will result in dependent samples.

When a matched pairs sample design is used, each observation in one sample is matched/paired/linked with an observation in the other sample. These are sometimes called “dependent samples.”

Matching could be by person (if the same person is measured twice), or could actually be a pair of individuals who belong together in a relevant way (husband and wife, siblings).

In this design, then, the same individual or a matched pair of individuals is used to make two measurements of the response – one for each of the two levels of the categorical explanatory variable.

Advantages of a paired sample approach include:

Disadvantages of a paired sample approach include:

For each participant both solutions are applied with the following protocol:

Here we have dependent samples since the same patient appears in both dosage groups.

Again, randomization is employed to help minimize other issues related to study design such as an order or testing effect.

Suppose the department of motor vehicles wants to check whether drivers are impaired after drinking two beers.

The reaction times (measured in seconds) in an obstacle course are measured for 8 randomly selected drivers before and then after the consumption of two beers. 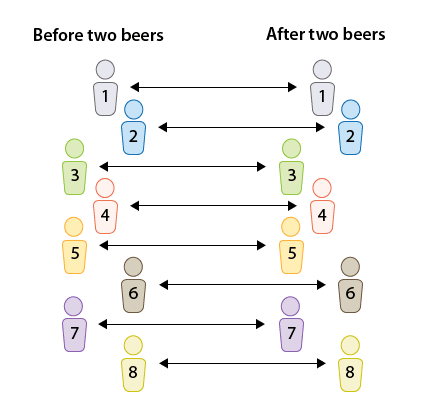 We have a matched-pairs design, since each individual was measured twice, once before and once after.

In matched pairs, the comparison between the reaction times is done for each individual.

We will begin our discussion of Inference for Relationships with Case C-Q, where the explanatory variable (X) is categorical and the response variable (Y) is quantitative. We discussed that inference in this case amounts to comparing population means. 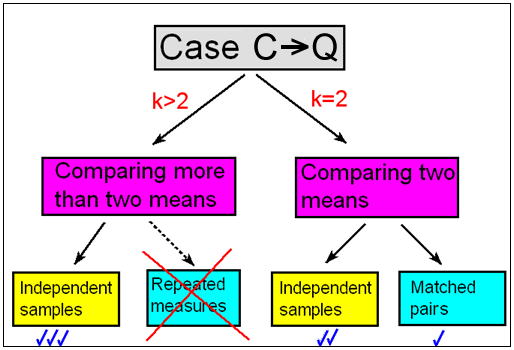 Now test your skills at identifying the three scenarios in Case C-Q.

Did I Get This?: Scenarios in Case C-Q
(Non-Interactive Version – Spoiler Alert)

Looking Ahead – Methods in Case C-Q

Here is a summary of the tests we will learn for the scenario  where k = 2.

Here is a summary of the tests we will learn for the scenario where k > 2.