CO-4: Distinguish among different measurement scales, choose the appropriate descriptive and inferential statistical methods based on these distinctions, and interpret the results.
CO-6: Apply basic concepts of probability, random variation, and commonly used statistical probability distributions.
LO 4.4: Using appropriate graphical displays and/or numerical measures, describe the distribution of a quantitative variable in context: a) describe the overall pattern, b) describe striking deviations from the pattern
LO 4.7: Define and describe the features of the distribution of one quantitative variable (shape, center, spread, outliers).
Video: The Normal Shape (5:34)

LO 6.2: Apply the standard deviation rule to the special case of distributions having the “normal” shape.

In the previous activity we tried to help you develop better intuition about the concept of standard deviation. The rule that we are about to present, called “The Standard Deviation Rule” (also known as “The Empirical Rule”) will hopefully also contribute to building your intuition about this concept.

For distributions having this shape (later we will define this shape as “normally distributed”), the following rule applies:

The following picture illustrates this rule:

This rule provides another way to interpret the standard deviation of a distribution, and thus also provides a bit more intuition about it.

To see how this rule works in practice, consider the following example:

The following histogram represents height (in inches) of 50 males. Note that the data are roughly normal, so we would like to see how the Standard Deviation Rule works for this example.

Below are the actual data, and the numerical measures of the distribution. Note that the key players here, the mean and standard deviation, have been highlighted.

It turns out the Standard Deviation Rule works very well in this example.

The following example illustrates how we can apply the Standard Deviation Rule to variables whose distribution is known to be approximately normal.

The length of the human pregnancy is not fixed. It is known that it varies according to a distribution which is roughly normal, with a mean of 266 days, and a standard deviation of 16 days. (Source: Figures are from Moore and McCabe, Introduction to the Practice of Statistics).

First, let’s apply the Standard Deviation Rule to this case by drawing a picture:

Here is a complete picture of the information provided by the standard deviation rule. 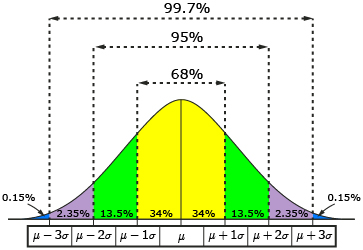 Did I Get This?: Standard Deviation Rule

LO 6.3: Use histograms and QQ-plots (or Normal Probability Plots) to visually assess the normality of distributions of quantitative variables.

The normal distribution exists in theory but rarely, if ever, in real life. Histograms provide an excellent graphical display to help us assess normality. We can add a “normal curve” to the histogram which shows the normal distribution having the same mean and standard deviation as our sample. The closer the histogram fits this curve, the more (perfectly) normal the sample. Unfortunately, we cannot quantitatively determine the extent to which the distribution is normally or not normally distributed using this method, but it can be helpful for making qualitative judgments about whether the data approximates the normal curve.

Note: QQ-plots are not scatterplots (which we will dicuss soon), they only display information about one quantitative variable and graph this against the theoretical or expected values from a normal distribution with the same mean and standard deviation as our data.  Other distributions can also be used. Here are a few more examples:

The following gives the QQ-plot, histogram and boxplot for variables from a dataset from a population of women who were at least 21 years old, of Pima Indian heritage and living near Phoenix, Arizona, who were tested for diabetes according to World Health Organization criteria. The data were collected by the US National Institute of Diabetes and Digestive and Kidney Diseases. We used the 532 complete records after dropping the (mainly missing) data on serum insulin.

Body Mass Index is definitely unimodal and symmetric and could easily have come from a population which is normally distributed.

The Diabetes Pedigree Function scores were unimodal and skewed right. This data does not seem to have come from a population which is normally distributed.

The Triceps Skin Fold Thickness is basically symmetric with one extreme outlier (and one potential but mild outlier).

Be careful not to call such a distribution “skewed right” as it is only the single outlier which really shows that pattern here.  At a minimum remove the outlier and recreate the graphs to see how skewed the rest of the data might be.

Since there were no skewed left examples in the real data, here are two randomly generated skewed left distributions. Notice that the first is less skewed left than the second and this is indicated clearly in all three plots. 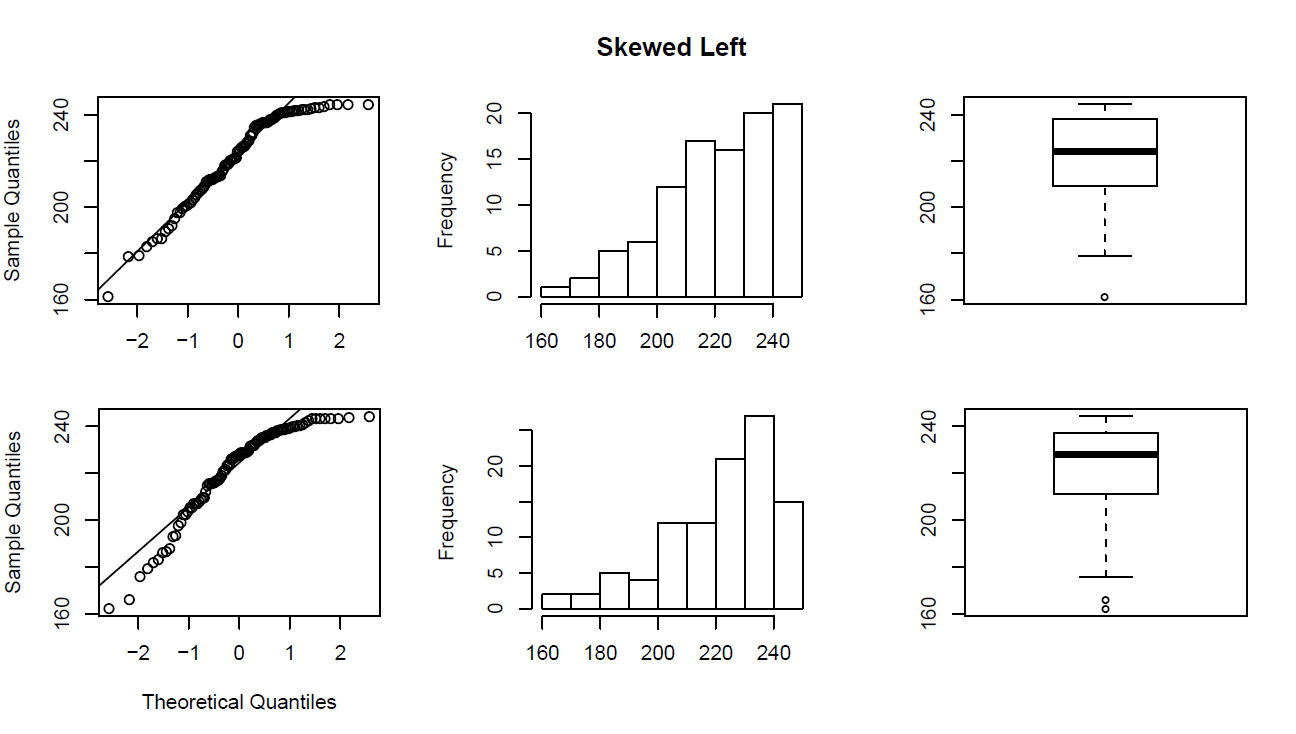 Did I Get This?: Assessing Normality
(Optional) Reading: The Normal Distribution (≈ 500 words)

If we calculate the standardized scores (or z-scores) for our data, it would be easy to identify these unusually large or small values in our data. To calculate a z-score, recall that we take the individual value and subtract the mean and then divide this difference by the standard deviation.

In previous examples, we identified three observations as outliers, two of which were classified as extreme outliers (ages of 61, 74 and 80)

Thus, among our female Oscar winners from our sample, this actress is 3.20 standard deviations older than average.

Did I Get This?: Z-Scores